Dr. John E. Hurtado was the Distinguished Alumnus and Commencement Speaker this year. Hurtado transferred from Fresno City College in 1985 to San Diego State where he earned a bachelor of science degree in aerospace engineering. He then earned a master of science and a doctorate from Texas A&M University. He is the interim head of the Department of Nuclear Engineering, Associate Dean for Academic Affairs in the College of  Engineering, and a professor of aerospace engineering. Dr. Hurtado and his wife Diane established the John E. Hurtado Endowed Scholarship in 2018 with a donation of $12,500. The endowed scholarship awards one student, $1,000, who is enrolled in 6 – 8 or more units with a GPA of 2.75 or better, is employed at least part-time and is a degree-seeking student.

A special ribbon cutting was held on May 16 at the Fresno Pacific University North Campus to mark the  expansion of educational opportunities for FCC students. The Fire Science Academy will hold several classes in the building and one classroom will be dedicated to EMT instruction. This unique partnership provides a pathway for fire science and EMT students to get the education they need to save lives and to continue their education with a bachelor’s degree in management or other fields at FPU.

A public forum was held on May 22 with the neighbors surrounding the campus to discuss the future  construction projects that include a new parking structure and science building. The meeting is a requirement
for the Environmental Impact Report (EIR) for new construction projects. FCC English instructor, Marisol Baca, is the new Fresno Poet Laureate! Marisol is the first woman and the first Latina to receive this honor. The three previous Poet Laureates, which includes FCC English instructor Lee Herrick, reviewed nominations and made their recommendation to Fresno Mayor Lee Brand. In a Letter of
Commendation to Marisol, Mayor Brand wrote, “…your voice serves as an example of excellence to your writers, women, and our diverse community. This appointment speaks to the great work that you have done and will
continue to do as an ambassador of the City, and we are fortunate that you are sharing your unique talent with your students at Fresno City College.” Marisol joined the FCC faculty in 2014. She has an associate degree from San Antonio College, a bachelor’s degree from Fresno State and a Masters of Fine Arts in creative writing from Cornell University.

The Fire Academy Completion Ceremony was held on Friday, May 31st in the OAB Auditorium. There were 35 cadets who completed the 804 hours required by the California State Fire Marshal’s Office Accredited Fire Academy. There are 27 cadets who have been hired by the Marin County Fire (3), North Central Fire Protection District (14), and Kingsburg Fire (10). The guest speaker was Chief Tim Henry, Fire Chief of the North Central Fire Protection District.

The Ram Pantry continues to serve a large number of students with 27,240 visits during the spring semester and over 300 student visits each day. Donations from the campus and community partners had a significant impact by keeping the shelves stocked. A special thanks to the Fig Garden Women’s Club for donating $4000 to the pantry this semester. For the first time, the pantry will be open during the summer, Monday thru Friday from 10:00 a.m. to 2:00 p.m. FCC welcomed Omar Gutierrez who was selected as the Vice President of Administrative Services. His prior work experience includes positions at Fresno Unified School District, Tulare County, Fresno County  superintendent of Schools, College of the Sequoias and most recently at West Hills Community College District serving as Director of Fiscal Services for the District. He earned a Master’s in Accountancy from Golden Gate University, a Bachelor of Arts Degree in Business Management from Fresno Pacific University, an Associate in Arts Degree in Liberal Arts from College of the Sequoias and a Chief Business Official Certificate from the California School Business Officials Association. Design Science Middle College High School held its graduation on May 31st, in the OAB Auditorium. Twenty-one of the 61 graduates earned an associate degree from the college. Fifteen of the graduates earned the  distinction of honors or highest honors. Students also took part in the Latino and Asian Pacific Islander graduation ceremonies. One hundred percent of the graduating seniors from Design Science have been admitted to a four-year university. Design Science was recently honored as a 2019 California Distinguished School.

It has been a busy time for the Guided Pathways workgroup who have made very good progress with the 5-year implementation work plan. The initial work consists of data review, program course sequencing, meta-majors and positive collaboration between Student Services and Instruction. In addition, dozens of inquiry-based activities and learning workshops were held throughout the academic year. Through the leadership of
co-chairs Kerry Ybarra and Equity Coordinator Dr. Ray Ramirez, the campus addressed several key elements that included AB 705 implementation, program mapping, technology integration, integrated planning,
and strategic professional development

On Monday, May 20, a meeting was held with regional law enforcement agencies and first responders regarding the First Responders Center to be built in southeast Fresno. Updates were presented on the purchase timeline, review of programs for the new site, design process and architectural review. The FCC Jazz Ensemble competed in the Reno Jazz Festival this spring and came away with a first place trophy in the Community College division. First year music instructor, Paul Lucckesi, attributes the band's success to the incredible jazz community at the college, and the hard work of the student musicians in the band.

College of the Canyons Special Visit

Dr. Diane Van Hook, Chancellor/President of Santa Clarita Community College District, and her executive team spent one day at FCC learning about the college’s Guided Pathways work, Equity initiatives and the award-winning approach that the Student Success Teams have developed to serve all students in an intentional and intrusive manner.

The FCC Chorale group will be traveling to Carnegie Hall in New York City to perform on June 15. There are 40 student singers from multiple ensembles participating in this special trip. Their itinerary also includes a workshop with the Air Force Singing Sergeants, the official chorus of the United States Air Force.

The dream of California comes alive as New Wrinkles celebrates their 31st season with a tribute to the Nation’s 31st state— California. From the earliest days to the present, music has fed the dream which brought people to the Golden State. Join New Wrinkles as they celebrate this music and California Dreaming. The production
runs through June 9. 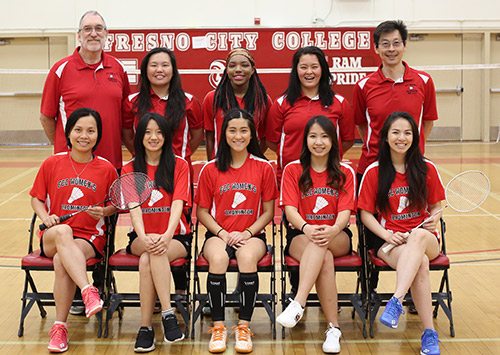 The women’s badminton team captured their second state title in three years defeating the Pasadena City College Lancers 12-5. The Rams finish their season undefeated with a 9-0 record. FCC head coach Panhia Vang has the distinction of directing a state champion team in her first year of coaching after she won as the Rams' top singles player in 2016

In their inaugural season, the Beach Volleyball Rams played their way into contention at the Coast Conference championship. Sophomores Katie Emmerling and Mia Corippo wrapped up conference play with a second-place finish in the Pairs Championships and finished 9th in the state. Both players were on the Ram volleyball team and started playing beach volleyball in January. The pair finished the season with an 11-7 record. Corippo, has signed a scholarship to attend Concordia-Irvine, and Emmerling received a scholarship to The Master's University.

The first of four Ram Camp sessions begins June 10. This is the 42nd  year of the popular summer sports camp. Campers will enjoy a number of activities including tennis, football, swimming, volleyball, soccer and more. The camp is run by the FCC Physical Education department. The program provides boys and girls, ages 6–14, the opportunity to improve their skill level, develop sportsmanship, fair play and an increased level of fitness. Session 2 begins June 24.