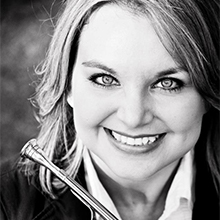 Elisha K. Wilson is currently serving as the Director of Bands, Brass and Music Theory atFresno City College, and is Horn Faculty at Cazadero Music Camp during summers. Prior to serving at Fresno City College, Elisha was the Horn Instructor at Sacramento State, Stanislaus State, Delta College, and the Music Director and Conductor of the Visalia OperaCompany. In addition to teaching at Fresno City College, Ms. Wilson currently serves as Principal Horn in the Sequoia Symphony, Wind Symphony of Clovis, and is a regular with the Fresno Philharmonic. Her collegiate studies are extensive, having studied at Chapman University in Orange, CA and University of Houston in Houston, TX. However, her formal studies include a Bachelor of Arts and a Master of Arts with an emphasis in Horn Performance from California State University, Fresno.

Ms. Wilson’s professional conducting opportunities have allowed her to conduct collegiate and secondary wind ensembles for the past five years. But her professional conducting career began with the Visalia Opera Company, having produced and directed Bizet’s Carmen, Engelbert Humperdinck’s Hansel and Gretel and Mozart’s Le Nozze di Figaro and an original Mariachi Opera., as well as Les Miserables with the League of Christian Actors in Visalia, CA.

In addition to her conducting career, Elisha has served as a featured horn soloist in many professional settings. Between June 2002 and December 2003, she performed as a horn soloist in the Tony Award-winning Broadway show, “Blast!”. In April 2012, Elisha was chosen to become a member of a performing group called The Edge, and was able to compete in the nationally televised talent show called America’s Got Talent in New York. She is an international soloist, having performed in Australia, Germany, Austria, and the Czech Republic, and she continually performs solos throughout the west coast with both orchestras and wind ensembles.

Ms. Wilson is a performing artist that is deeply committed to music education through her membership to the California Music Educators Association, Fresno-Madera Music Educators Association, College Band Directors National Association, International Horn Society and the Musicians Union Local 12. She has been invited as a clinician, guest speaker and presenter giving lectures on horn pedagogy and peak performance practices across the state of California. She also teaches a private horn studio with students from Visalia, Fresno, Clovis, Turlock, Modesto andSacramento.