The 2019 Reg-to-Go program served over 7,600 high school students, with 3,170 students enrolled at FCC for the 2019 fall semester. There are currently 2,641 class sections offered with a 100.9 percent fill rate. In addition, over 2,000 students and parents attended Ram Ready sessions on August 6 and 10. Thanks to classified staff, faculty and administration for supporting this effort!

For the second year in a row, the EOPS Program exceeded their goals by registering 2,109 students for the fall semester. As a comparison, the unduplicated headcount for 2018-2019 school year was 2,218. EOPS provides individualized counseling and advising, financial and textbook assistance, an internship program, and tutoring services. EOPS also houses the CARE program for single parents receiving public assistance and the NextUp program for current and former foster youth. 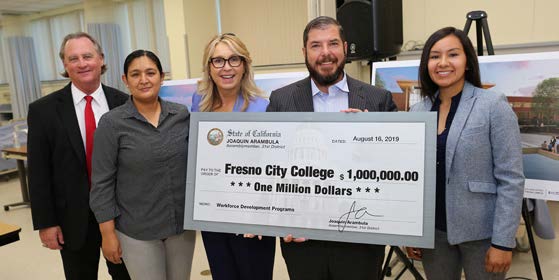 On Friday, August 16, Assemblymember Dr. Joaquin Arambula held a news conference in the Nursing Skills Lab to announce the allocation of $1 million to help fund the future West Fresno Center. The funds will be used to purchase equipment for pre-nursing, medical assisting and automotive technology programs.

FCC will be hosting the Title V Collaborative Grant Project entitled Financial Literacy University with keynote speaker, Dr. Sara Goldrick-Rab on September 6 and 7. Her presentation on Friday evening is entitled “The Real Cost of College,” and will be held in the Old Administration Building Auditorium at 6:00 p.m. Her latest book, Paying the Price: College Costs, Financial Aid, and the Betrayal of the American Dream, is an Amazon best-seller and a 2018 winner of the Grawemeyer Award. Saturday’s events will include workshops on scholarships, financial aid, and preparing for the FAFSA. Both events are free and open to the public.

FCC is a proud sponsor of this year’s Central California Women’s Conference to be held on September 17 at the Fresno Convention and Entertainment Center. FCC President, Dr. Carole Goldsmith, will participate in a panel session entitled, Women in the Central Valley: A Snapshot of Now and A Look Toward the Future with several other panelists. Tyra Banks is the luncheon keynote speaker this year.

Fresno City College will participate in the annual Fresno Area College Night at the Fresno Convention Center on September 11. During this event, thousands of students and families from the Central Valley have the opportunity to learn about their options in higher education from over 100 colleges and universities in attendance. Fresno City College will make presentations during breakout sessions on the topics of scholarships, preparing for college, and the community college system.

Preparations for the 2019 fall semester included plenty of media coverage. Dr. Goldsmith made an appearance on KSEE Channel 24 Central Valley Today show highlighting the start of the school year, college updates and State of the College breakfast. Dental Hygiene instructor, Luisa Bransford, was interviewed on Valley Focus by ABC30 anchor, Liz Harrison, regarding the dental services that are provided to the community in the FCC Dental Hygiene Clinic. 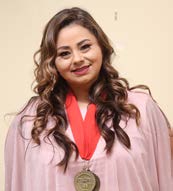 Victoria Rocha, a single mother with five children and formerly incarcerated, will be featured in the next edition of Fresno’s Focus Forward Magazine. She was awarded both the Dean’s Medallion in the Social Sciences Division and the Tony Cantu President’s Medallion in May. Victoria earned her associate degree in human services – alcoholism and drug abuse counseling. A local nonprofit organization, Focus Forward’s mission is to create pathways to success for youth in the Fresno County juvenile justice and foster care systems. 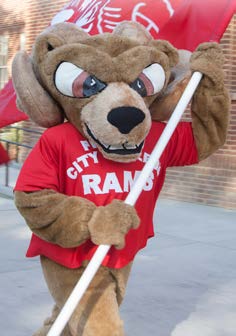 The second annual FCC Open House will be held on September 28 from 10:00 a.m. to 2:00 p.m. Many activities are planned that include demonstrations by the fire and police academies, a resource fair, campus tours, financial aid workshops, student entertainment, healthsciences orientation, student club booths and student poetry readings.This event is free and open to the public and targets potential students,their families and the community.

FCC was named one of the best community colleges in California for students to earn an online degree or certificate. Currently FCC offers an online Associate in Science in Health Information Technology, Associate in Science in Library Technology, and two Associate in Arts Degrees for Transfer in Business Administration and Spanish. In addition, a Library Technology Certificate of Achievement is available.The ranking was completed by the SR Education Group utilizing factors that included affordability and academic strength.

Kudos to all dedicated classified staff working in the Financial Aid Office as they have broken many customer service records! The Financial Aid Office has disbursed approximately $9.3 million in financial aid to 7,500 students for the 2019-2020 academic year, thus far. Due to a change in federal regulations, additional financial aid was awarded to students during the summer term.

On August 15, Fresno City College hosted a lunch meeting for members of the Fresno Region College Pipeline Plan, which includes people from area agencies and organizations. Lande Ajose, Governor Newsom’s Senior Policy Advisor for Higher Education, was also in attendance. He learned about the innovative partnerships underway in the Fresno metro area with the established and integrated K-16 system that prepares the region’s students for post-secondary success and contributes to an inclusive economic development for the Central Valley.

Over 50 colleges, universities and organizations will be in attendance at the Transfer Day and College Fair on Sept. 11. The event allows students to network and research transfer opportunities and programs as well as discuss admissions questions and facts about each school. There will be workshops in the afternoon including HBCU Transfer Pathways and Transfer Scholarships, to name a few. 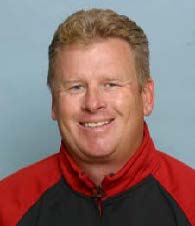 Assistant Baseball Coach, Eric Solberg, was named the Assistant Coach of the Year for community colleges by the American Baseball Coaches Association. He has guided Fresno City College pitching staffs for over 30 years and has coached four pitchers who have gone on to reach the major leagues. Solberg’s 2019 staff finished the season with a 3.14 team ERA and 463 strikeouts as the Rams advanced the CCCAA NorCal Super Regionals. He is also the head coach for men’s soccer and won his first state championship in 2017. 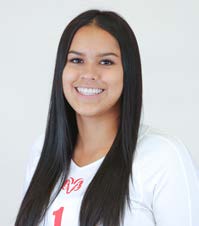 The Ram athletic teams have started their respective seasons and are off to a strong start. Keep up to date on the action and game schedules.