The year was 1910. The old Fresno Traction Company had just added two new trolley lines in downtown Fresno. J. C. Forkner was just beginning to plant the first trees in Fig Garden. And it hadn’t been too long since Theodore Kearney had escorted Lilly Langtree to her performance at the city’s old Barton Opera House.

The college’s history began in 1907 when C. L. McLane, then superintendent of schools for the city of Fresno, recognized the need for college instruction for San Joaquin Valley students. Largely through McLane’s efforts, Fresno Junior College was established. The first class consisted of 20 students and three instructors.

The campus was originally located at the former Fresno High School campus on “O” Street. In 1921 Fresno Junior College combined with the then Fresno Normal School, later Fresno State College and currently California State University, Fresno, to operate the junior college on the same campus as the four-year school. Fresno Junior College continued to grant associate degrees and offer a two-year curriculum, but its campus and staff were identical with those of the normal school.

In 1948 new laws permitted local school districts to operate junior colleges, and Fresno City College returned to the “O” Street campus, which it shared with Fresno Technical High School. By 1950 the technical high school program had been phased out and the district began looking for another campus. The junior college district completed negotiations for the purchase of the University Avenue site from Fresno State College. By 1956 Fresno City College had moved to University Avenue.

The California Community College system has now grown to 109 campuses, enrolling approximately 1.5 million students. Fresno City College has built upon its rich history and gone on to pioneer many new developments in community college education. Thou-sands of local people have worked through the years to make Fresno City College a viable and strong educational institution.

It is the original classroom building on the former Fresno State College which is now called California State University, Fresno. The building was part of the FSC campus which consisted of this classroom building, the library, McLane Hall, and several technical shop buildings. This building and the Library building are on the Federal List of Historical Buildings.

When the California State University system added FSC to its rolls in 1946 and acquired the land for its current location on Shaw Avenue and Cedar Street, the "old campus" was given to the newly re-organized community college system. Fresno Junior College moved onto this campus in 1947 from the downtown Fresno site which it occupied since 1910. The name was changed to Fresno City College on May 11, 1958.

In 1931, construction began on the building and in September 1933, the Fresno State Teachers College library was opened. The cost of the construction was $260,000 which included the land and all the furnishings. 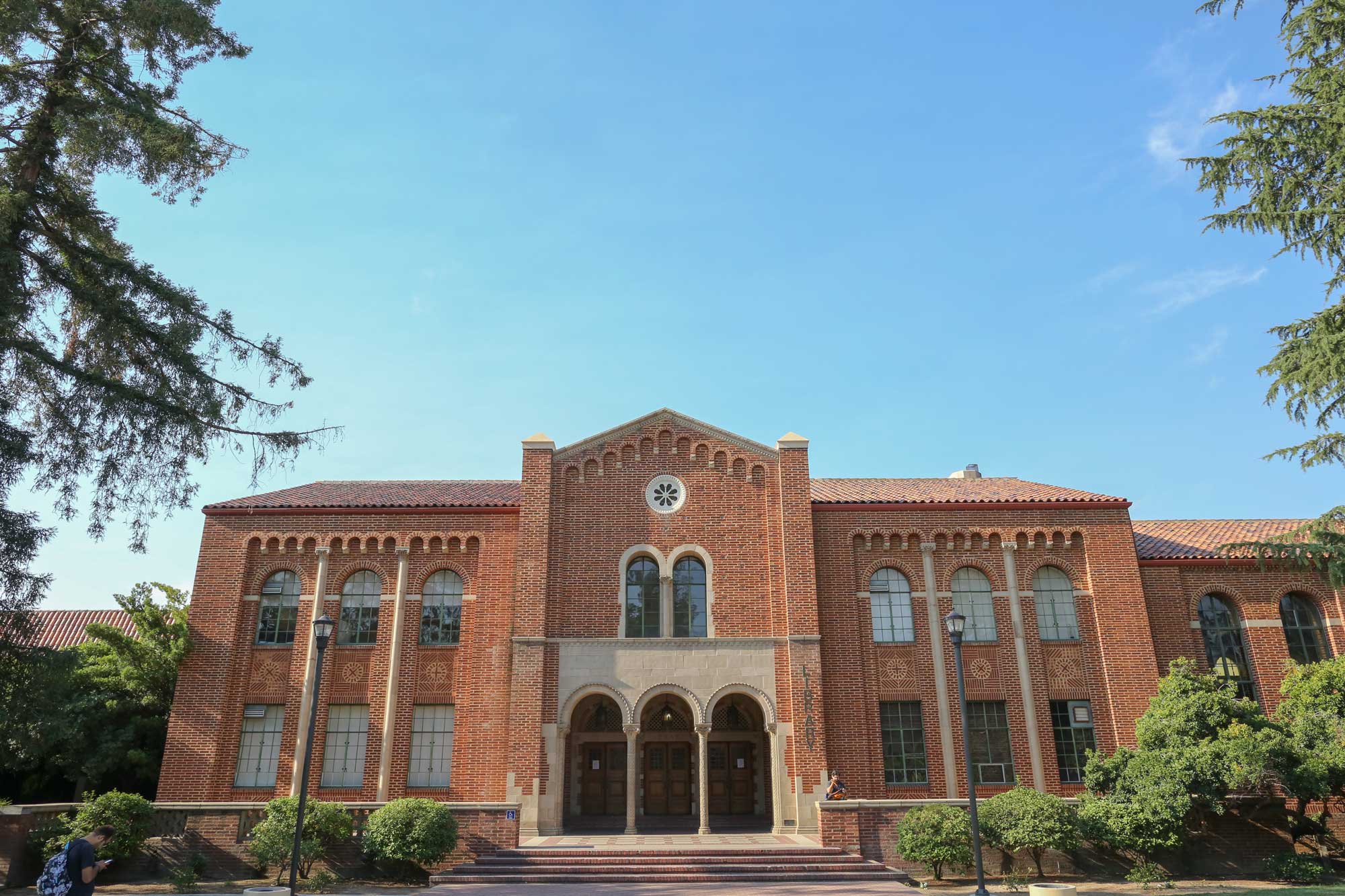 The architectural design is primarily Romanesque with its extensive use of curved arches, terra cotta tile roof and brickwork. There are 100,000 face bricks in six shades of color, ranging from buff to purple, laid with unequal thickness of mortar. The library was built to conform to the look of the Historic Old Administration Building, built in 1916. 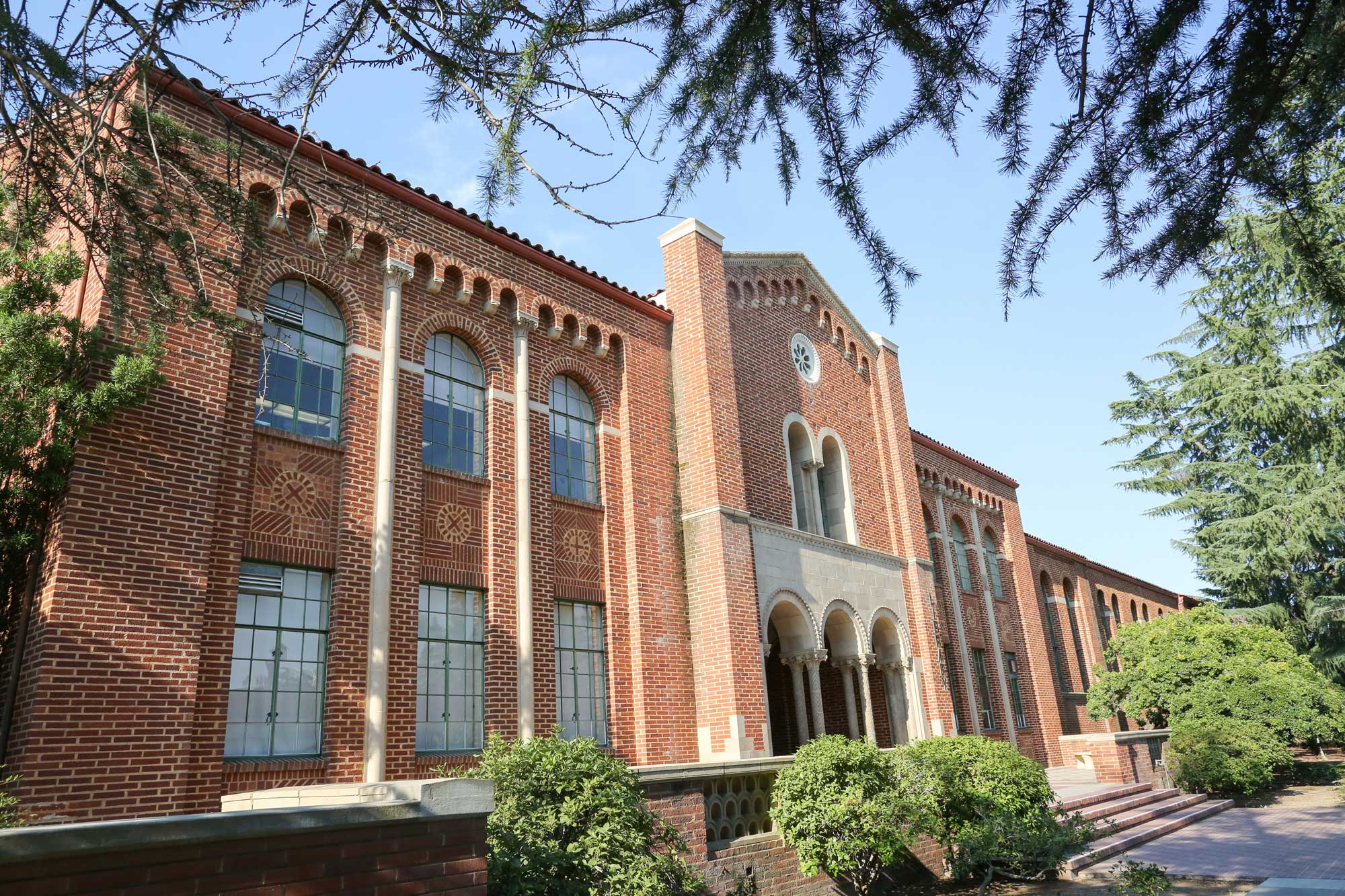 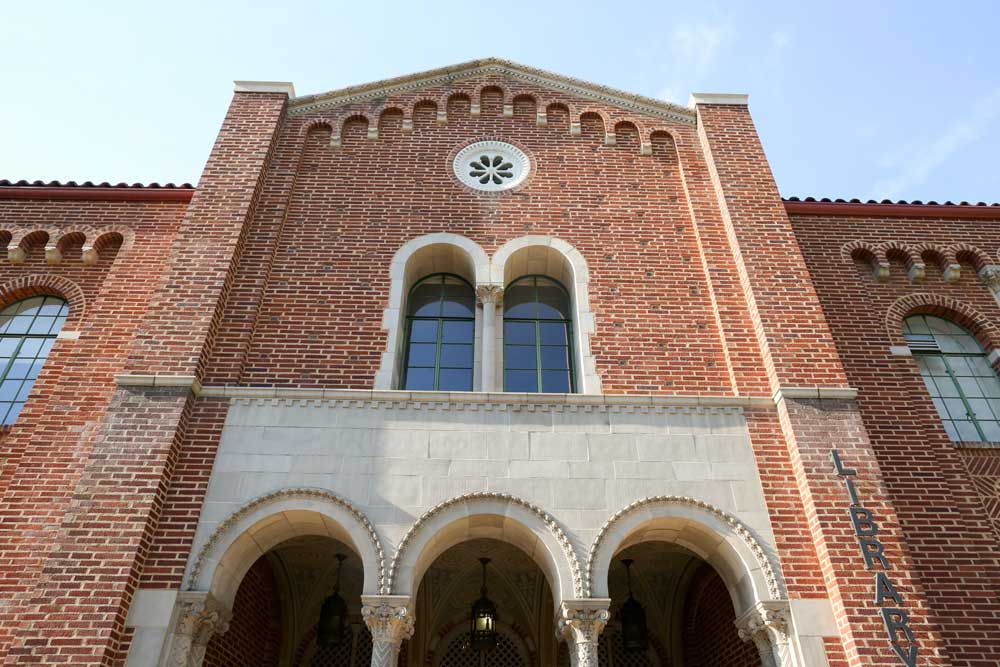 The Entrance Terrace and Vestibule

The eight terra cotta columns of the vestibule are of three different designs and the brick work flooring has various patterns and colors. Above the three brass light fixtures, the painted overhang features a motif of large, intricate rosettes and smaller, more simplified, ones. This rosette motif, as well as the arches, columns, gold leaf painting, the basic color scheme accented with oak and brass, is repeated in the walls and ceiling in the Reference Room. 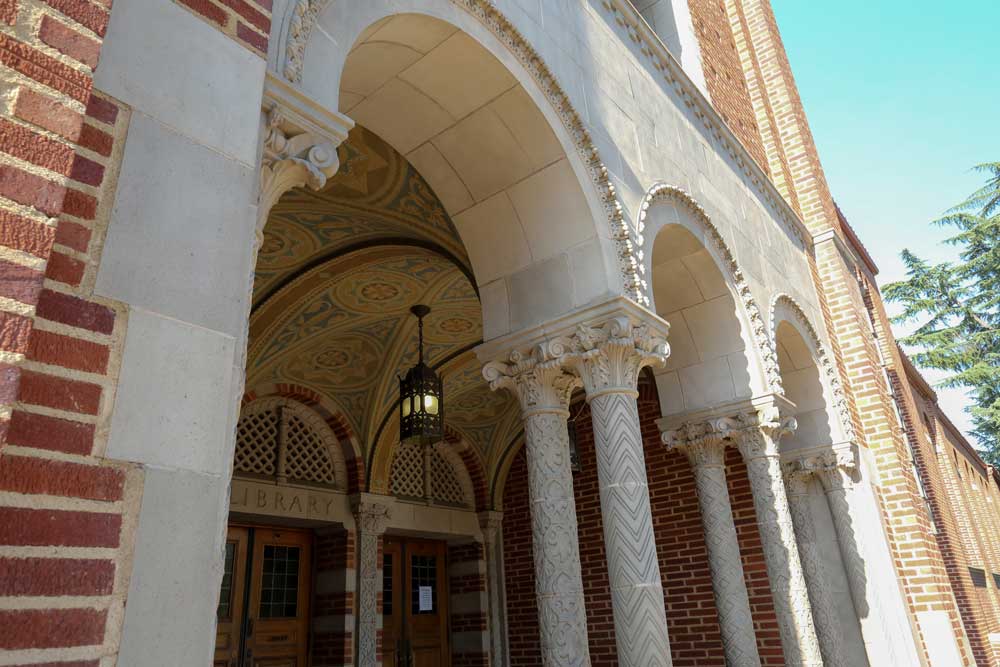 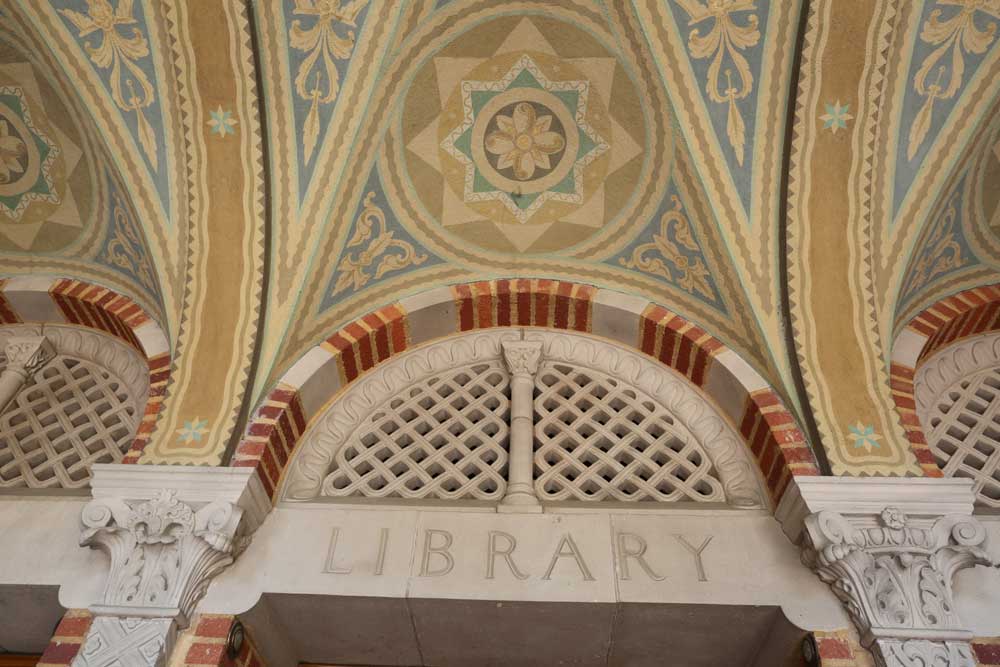 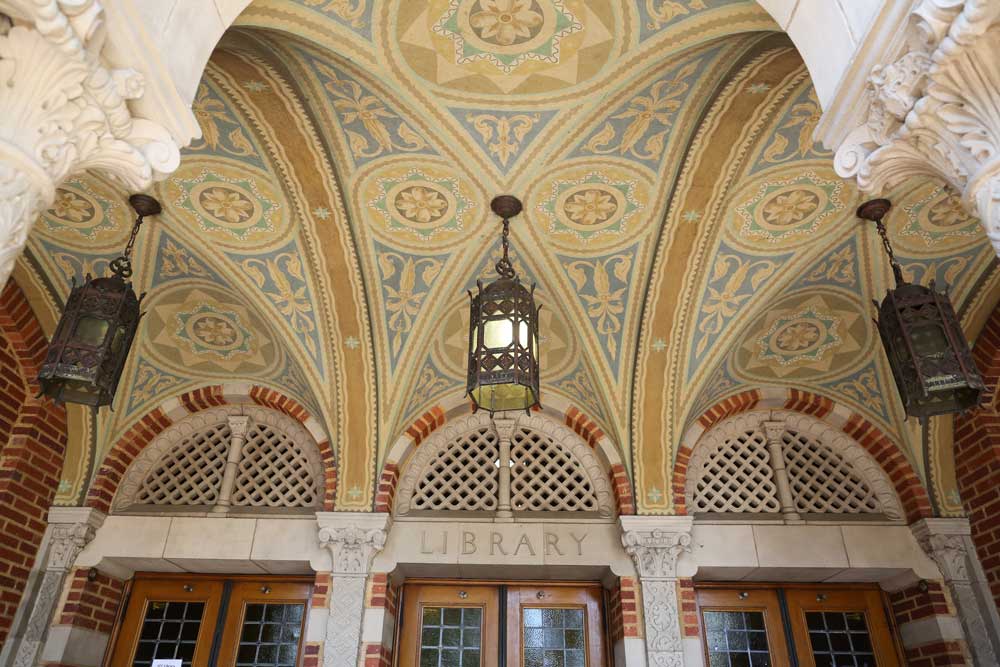 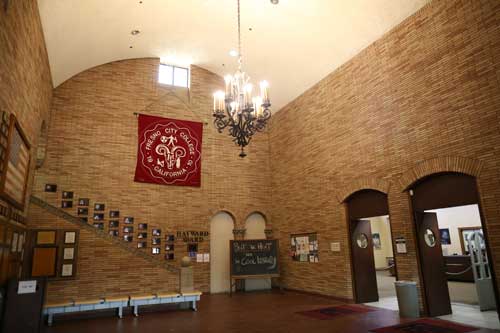 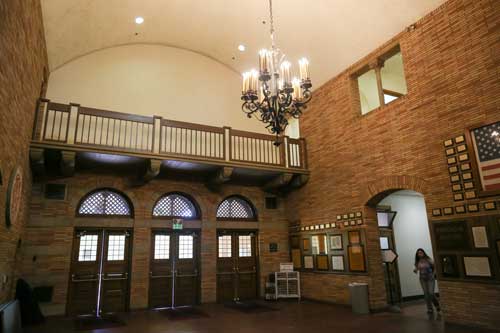 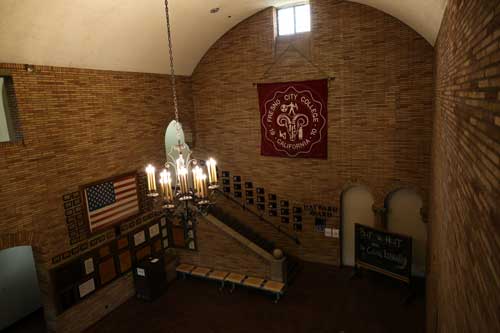 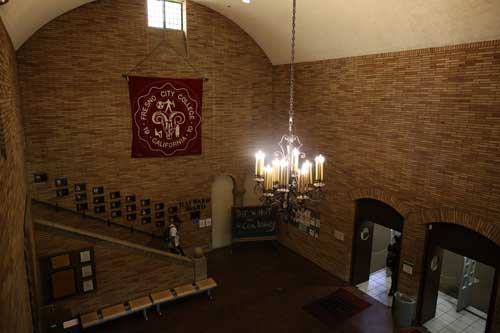 Located here in the lobby is the Freedom Shrine where copies of key documents relating to the historical freedom of the United States are on display. View the Declaration of Independence, the Constitution, surrender documents from World War II and many more.

From the Lobby, you can turn left and go to the Learning Resources Office, Tutorial and Media Centers, the Student Success Computer Lab, Financial Aid and various other college offices. If you go straight ahead and up the stairs, you will reach the second floor classrooms. If you turn right, you will enter the heart of the library, the Circulation Area. 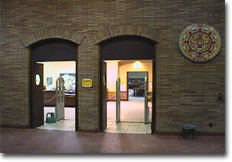 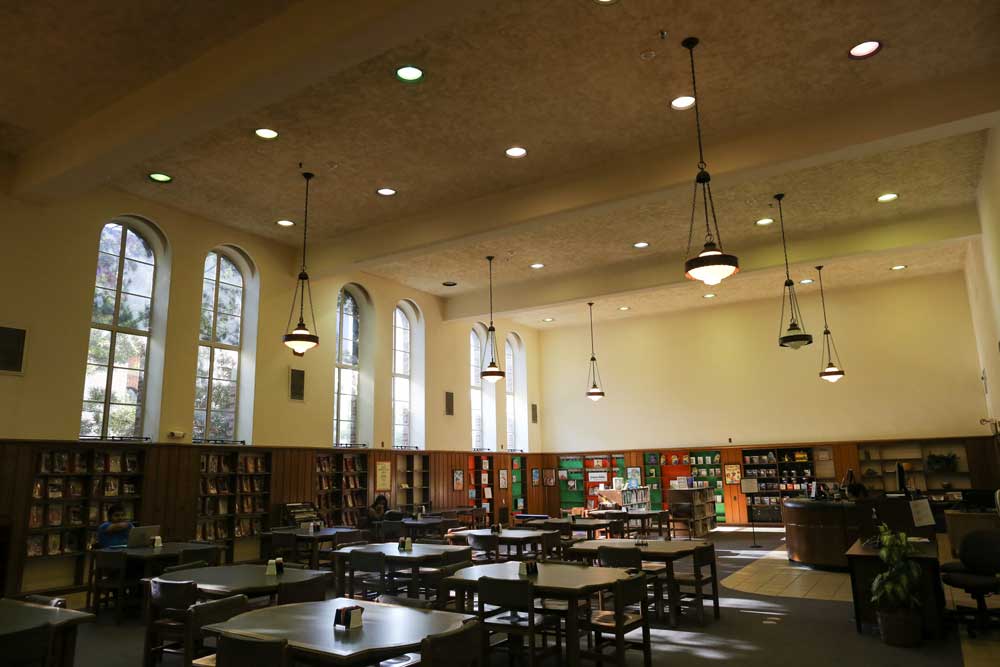 The Library Conference Room was originally a browsing room for students with lounge furniture, a fireplace, leather-covered doors and knotty-pine paneling. The inscription on the fireplace mantel reads, “There is no friend like a good book.” The room is now used as a conference and meeting room.

This is the library’s original Main Reading Room, now called the Reference Room. The inscription over the room’s entrance reads, “There is no past, so long as books shall live.” This is a line from a poem, “The Souls of Books,” by Edward Lytton, a 19th century English poet. Lytton also coined the phrases, “the pen is mightier than the sword,” “the great unwashed,” and “the almighty dollar,” but he is probably most infamously well-known for the opening sentence from his novel, Paul Clifford: “It was a dark and stormy night...”

The room is 107 feet long and 50 feet wide with columns and arched windows running down the length of the room. The ceiling is 30 feet high and the 12 bell-shaped lamps are of bronze. In 1976, mercury vapor light fixtures were installed in the ceiling to improve the lighting. The sturdy tables and chairs are of oak.

The ceiling artwork is the most famous feature of the library. It duplicates the rosettes and gold painting from the vestibule, but it also presents the evolution of culture and civilization through various periods of history.

The ceiling was designed by Anthony B. Heinsbergen of Los Angeles, California. He was born in Holland and came to the United States in 1906. He created the art work for the Los Angeles City Hall, the California State Building also in Los Angeles, twenty-two Pantages theaters across the country, including the Tower Theater in Fresno, and many other civic buildings. Heinsbergen often painted on canvas and then applied them like wall paper. He died in 1981 at the age of 86.

There is no past, so long as books shall live.” 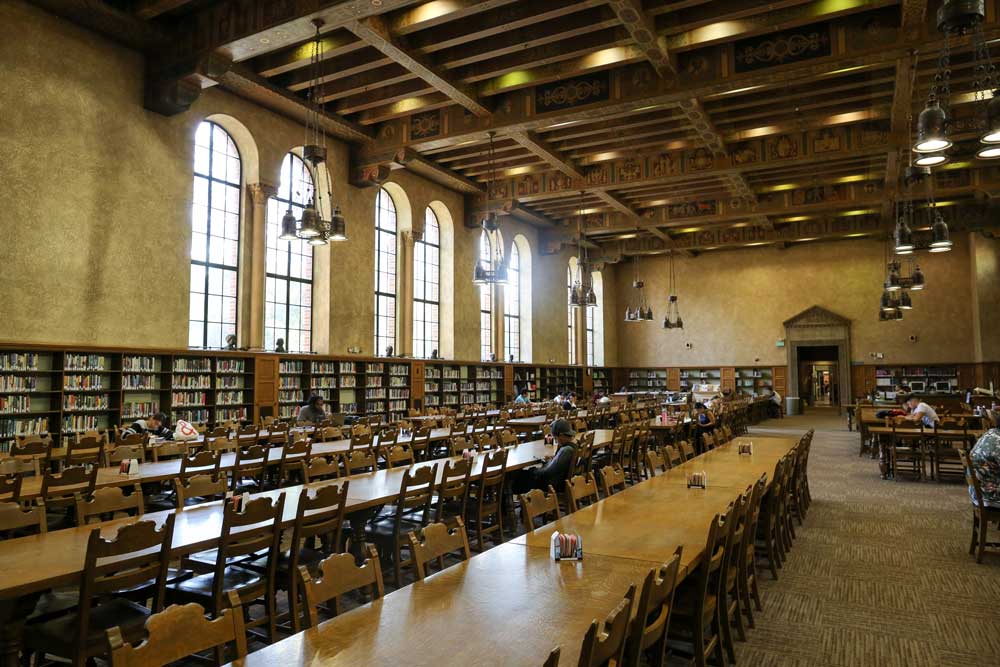 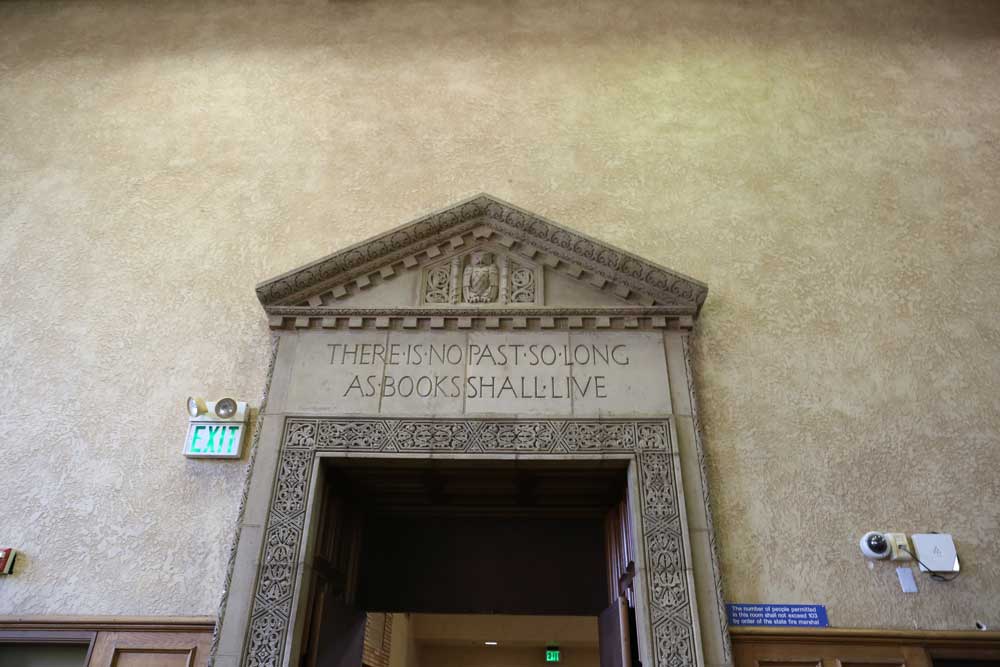 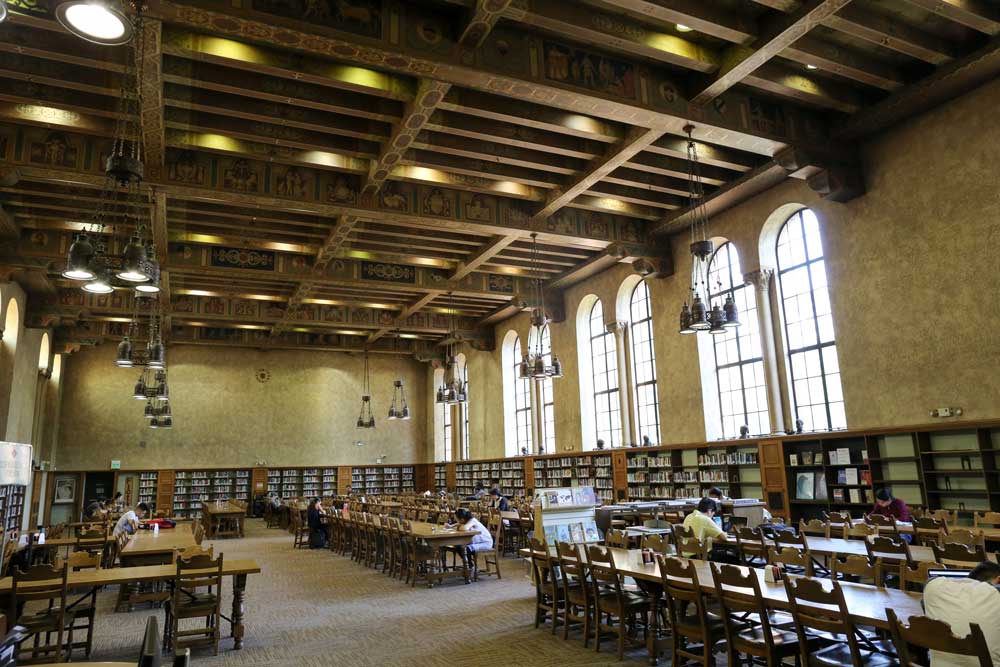 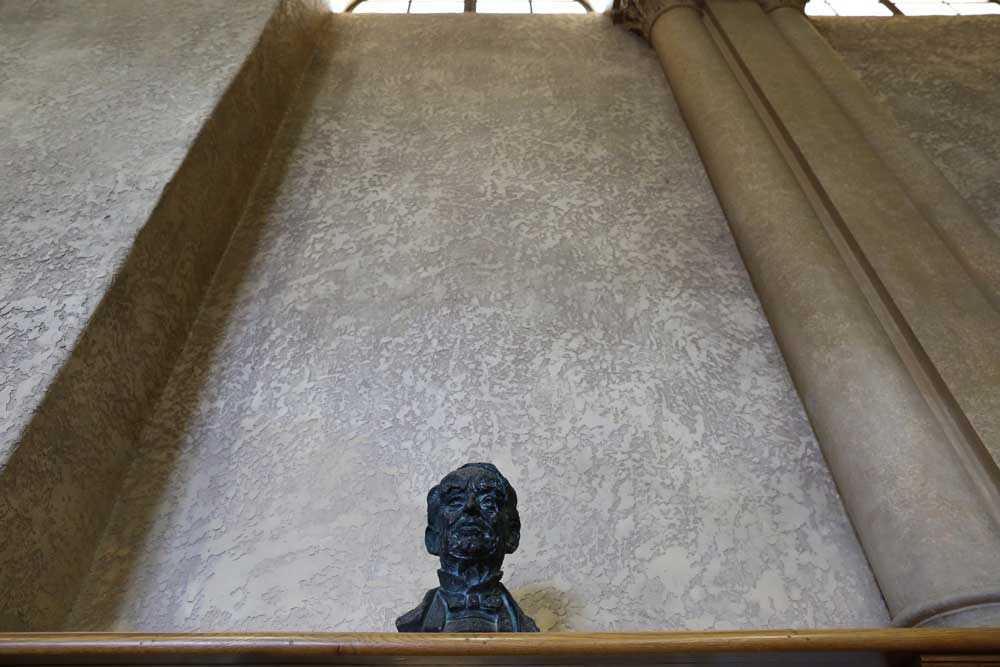 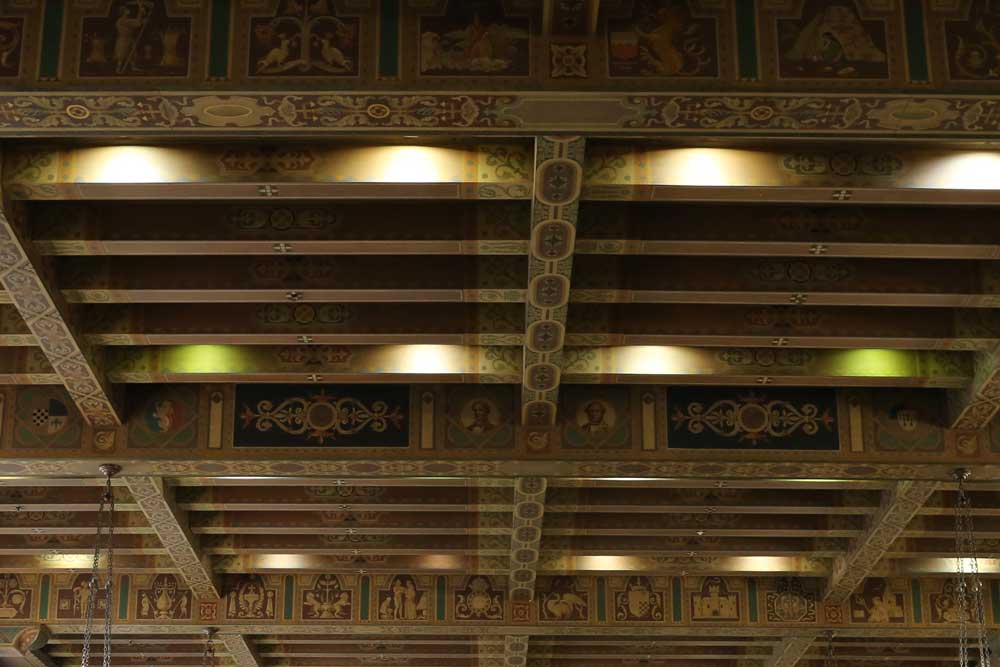