In a recent report released by the U.S. Department of Education's College Scorecard, Fresno City College continues to increase graduation rates (23 percent) and transfer rates (36 percent). The report also highlights earnings of students after graduation by field of study and provides additional information on the average cost of college.

Last month, Fresno Pacific University held their annual Spark Tank Pitch competition at Lanna Coffee. FCC entrepreneurship student, Alyssa Ndombeson, pitched her e-commerce business for sustainable products and won $5,000 and another $580 for being the people's choice recipient. She will also be receiving a full scholarship to FPU's Social Enterprise Academy.

This year’s GivingTuesday had over 60 donors who helped raise more than $40,000 for the FCC Ram Pantry. We are especially grateful to our matching donors, State Center Community College Foundation Board president, Gina Cuttone and SCCC Foundation treasurer Chris Morse and his wife Michelle who provided $10,000 in matching funds! We appreciate the efforts of students, staff, faculty and friends of the college who came together to make this effort a success. 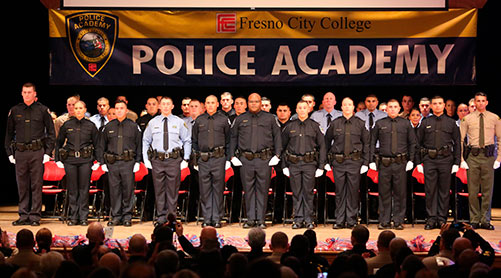 The Police Academy held a graduation ceremony on Thursday, December 5, with 44 cadets graduating and 31 badged. The ceremony was held in the OAB Auditorium at 3:00 p.m. The keynote speaker was Clovis Police Chief Curt Fleming.

The Fire Academy Completion Ceremony was held on Friday, December 13th in the OAB Auditorium. There were 19 cadets who completed the 804 hours required by the California State Fire Marshal’s Office Accredited Fire Academy. There are 6 cadets who have been hired by North Central Fire Protection District, one cadet hired by the City of Coalinga, and another cadet was hired by the City of Sanger. The guest speaker was Deputy Fire Chief of the North Central Fire Protection District, Jacob McAfee.

The Registered Nursing Pinning Ceremony will be held on Saturday, December 14, 2019 in the Fresno High School Auditorium with the ceremony to begin at 1:00 p.m. One hundred and six graduates will receive their sashes and pins.

Our one-stop registration events will be held on January 3 and 4 in the Library Building as staff and faculty help students prepare for the 2020 spring semester. Available services for students will include assessment testing, counseling, registration, financial aid, and business services. 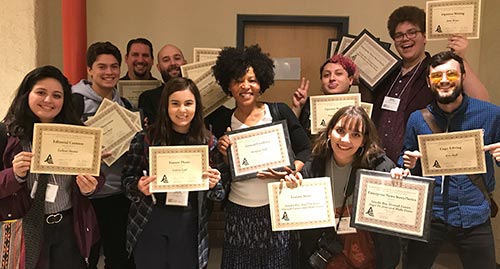 BIGThe Rampage staff participated in the Journalism Association NorCal conference at San Jose State University on Saturday, November 16. Below is the list of awards in both the mail-in and on-the-spot contests in which they directly competed with student journalists from other colleges.

General excellence in print for content, layout, design and representation:

The 32nd Annual Baseball Dinner is slated for Saturday, January 11 at 6:00 p.m. in the Old Exhibit Hall at the Fresno Convention Center. Tickets are $150 per couple or $750 per table. A sports auction, live auction, raffle prizes and dancing are also included in the event.

Hope for the Holidays

Two hundred FCC students benefited this year from Hope for the Holidays. Hope for the Holidays helps make this season a little brighter for these students and their families by providing a $50 Save Mart gift cards. Distribution of the gift cards took place December 5 and 6 in the Student Lounge. Each of the students were nominated by faculty and staff. More than $7,500 was raised through the generous support of the college community and includes a $3,000 donation from the Educational Employees Credit Union. In addition, Reading Heart donated 600 children’s books and the FCC Dental Hygiene Department donated 50 children’s toothbrushes. Thank you to Karen Breit from KSEE24/CBS47 for her coverage of the event. Here’s the story. 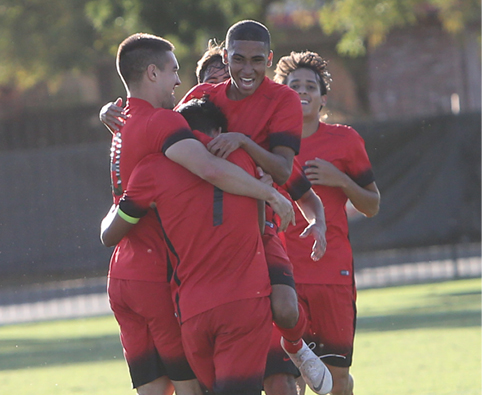 For the second time in two years the men’s soccer team has won the State Championship beating Mt. SAC 2-0 at De Anza College on December 8. Angel Alvarado and Pedro Gomes were named co-Most Valuable Players. They clenched the Central Valley Conference title and finished the season with a solid 18-1-7 overall record.

The football team went undefeated in Valley Conference play (5-0) and won their conference title. They ended the season 8-3, ranked #4 in Northern California and top ten in the state. Coach Tony Caviglia was awarded Coach of the Year for the second year in a row, and the team had 14 All-Conference players. The women’s soccer team won the CVC title, finishing with an impressive 19-3-3 record. The volleyball team went undefeated in conference play and won the CVC title and was ranked #2 in Northern California. They notched an amazing 31-3 overall record this season and made it to the State Championships. For all upcoming athletic competitions, check out the team schedules.