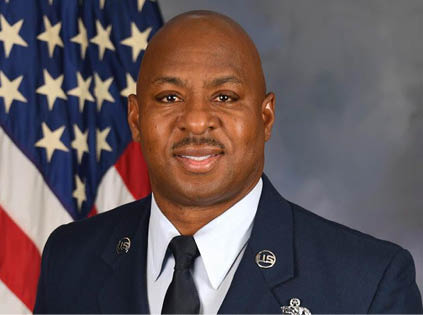 On November 9, a Veterans Day Ceremony will be held at noon at the Veterans Peace Memorial. Chief Master Sergeant Lynn E. Williams of the California National Guard is the keynote speaker. CMSgt. Williams was last year’s Citizen Soldier Award recipient, but was unable to attend. This event is celebrating the 75th Anniversary of U.S. Air Force. 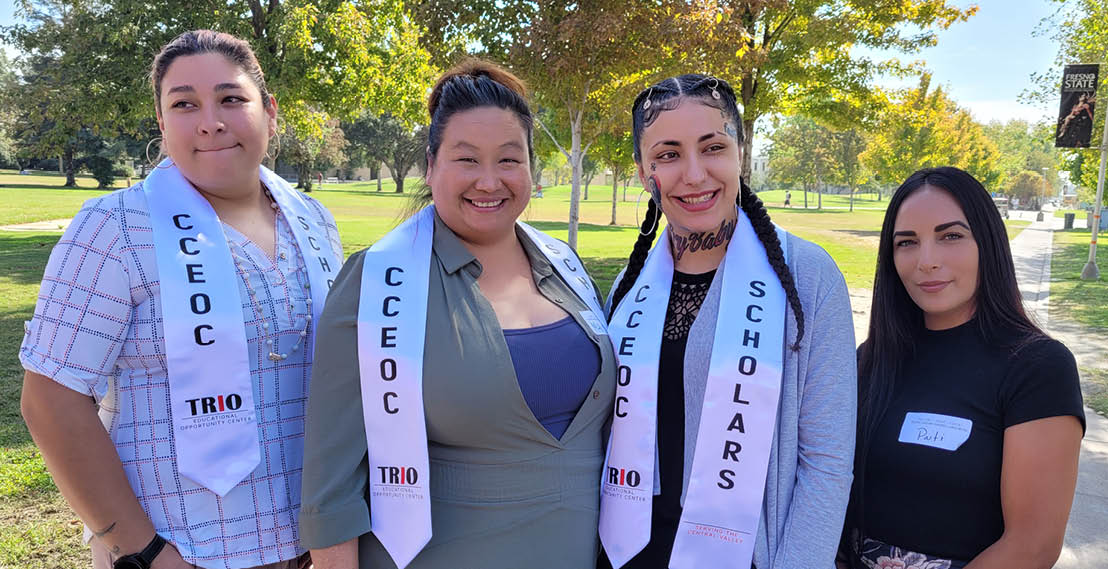 On October 20, four FCC TRiO students were awarded academic scholarships by AT&T, the Central Valley Women’s Conference and the Central California Educational Opportunity Center at Fresno State. The women, Maricela Amezcua (Psychology), Mai Vang Chang (Human Services), Korem Patino (Music), and Patricia Hernandez (Early Childhood Education) each received a $600 scholarship and were recognized at a luncheon for their perseverance and sacrifices made in their college journey. 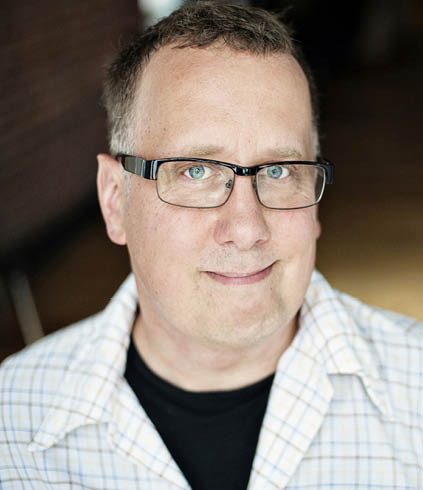 Coming up next on the Speakers Forum schedule is John Moe, creator and host of the hit podcasts Depresh Mode and The Hilarious Work of Depression. John will speak on how we can recover from the mental health effects of the COVID pandemic: “Moving Forward After COVID: Trauma and Mental Recovery.” He will speak Wednesday, November 9, 2022 at 1:00 p.m. in the OAB Auditorium followed by a book signing. Admission is free.

For the first time, FCC took part in the Great California #ShakeOut drill designed for organizations to practice earthquake safety. The ShakeOut is an international event and was held across campus and gave the college the opportunity to go through an actual drill to help prepare in case of an emergency. The FCC fire and police cadets also participated by going through all areas of campus to make sure everyone exited buildings as planned and looked for individuals trapped or hurt.

The in-person Fall Carnival took place for neighborhood elementary school students on October 28 on the University Mall. The Student Activities Office and ITE Committee organized this special, free event for the children and their families. FCC Faculty, staff and students donated candy. A Pumpkin Decorating Contest was held for the entire campus on October 26 in the Student Activities Office. Prizes were awarded. All pumpkin submissions were displayed at the Fall Carnival.

The Latino Faculty and Staff Association decorated Día de los Muertos altars that were displayed in front of the Library on November 1. Marigolds, the traditional/iconic flower, were used to decorate the altars for the dead. Altars were created with offerings for the dead that included photos, candles, food, mezcal and tequila, sugar skulls and the cempasúchil. The belief is that the bright colors of the flower lead the souls of the dead from their final resting place back to the homes of their loved ones for the festivities.

For the fifth year, FCC will participate in the global day of giving call #GivingTuesday on November 29. The fundraising goal is $40,000 and all proceeds will benefit the Ram Pantry. The pantry is a food assistance program open to all students currently enrolled at the college at no cost to the students. State Center Community College board member Gina Cuttone will match $2000 and donor Kay Bonner will match $5000 in donations for this year’s campaign.

From November 4 – 6, a concert of exciting dance numbers highlighting both student and faculty choreography will be performed in the theatre. It will include various dance forms, including different cultural dance styles. Tickets are $14 General, $12 Students/Staff/Seniors, $8 Group (10 or more) and can be purchased online.

There are a wonderful range of musical performance scheduled in November that include Rams Jams, the Latin Jazz and Jazz Ensemble concert, the symphony orchestra concert and the Opera Workshop: The Merry Wives of Windsor. All schedules and ticket information are available online.

International Students week will be celebrated from November 14-18, 2022. FCC will host several activities during the weeklong celebration. Activities include a proclamation of support of International Education from the FCC President’s Office and a traditional Sikh meal served free to students and staff on Monday, November 14; also on Monday, an International Education Student Forum; an Origami workshop on November 15; cultural performances from multiple dance groups in the cafeteria on November 16; and daily a display of countries and students from around the world in the library. 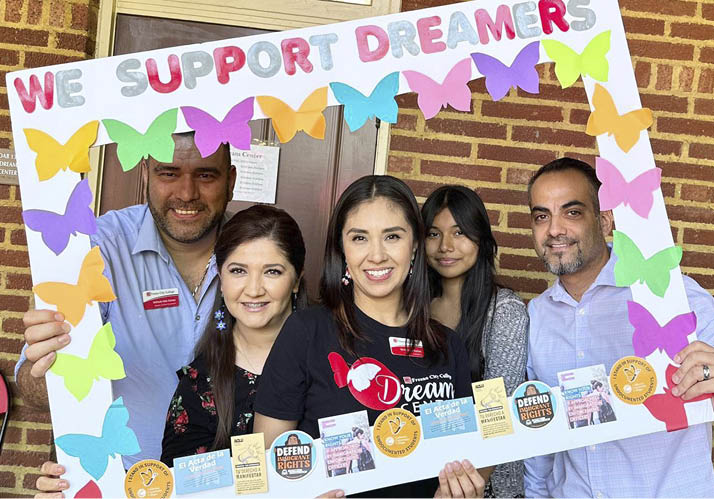 The sixth annual FCC Undocumented Student Action Week was held from October 17-21. The week-long series of events featured the best practices for supporting undocumented student success, promoting ways to collaborate across sectors, and advocate for budget and legislative action in support of the long-term success of undocumented students. Interim State Chancellor Daisy Gonzales, PhD, released this message during Undocumented Student Action Week. The Fresno City College Dream Center organized a number of events on campus to commemorate the week that included a professional Dreamers Panel, Dream Advocators performance, a meet and greet lunch for Dreamers, a workshop is for faculty and staff and a virtual DACA webinar hosted by the State Chancellor’s Office.

After a two-year hiatus, FCC participated in the annual Career Tech Expo on October 19 at Chukchansi Park, which drew over 2,500 students from local schools. FCC had a large presence at the event, with over 25 table displays highlighting career and technical education programs. Display and live demos were presented by: electrical systems technology, welding, maintenance mechanics, HVAC, construction, allied health, business, automotive and diesel, graphic communications, photography, automotive collision repair, EMT, fire, police, and criminology programs. Students were excited to see 12 vehicles from the EMT, police and fire academies as well as the automotive and diesel programs and FCC partners.

The theater production of Love/Sick by playwright John Cariani and directed by theater instructor Leslie Martin, is slated for November 11 – 20 and is a collection of nine quirky and often sad vignettes about the joy and pain of falling in and out of love. Each vignette tells the story of one couple in the midst of passion and despair and together they show the cycle of the highs and lows of relationships. Tickets can be purchased online. 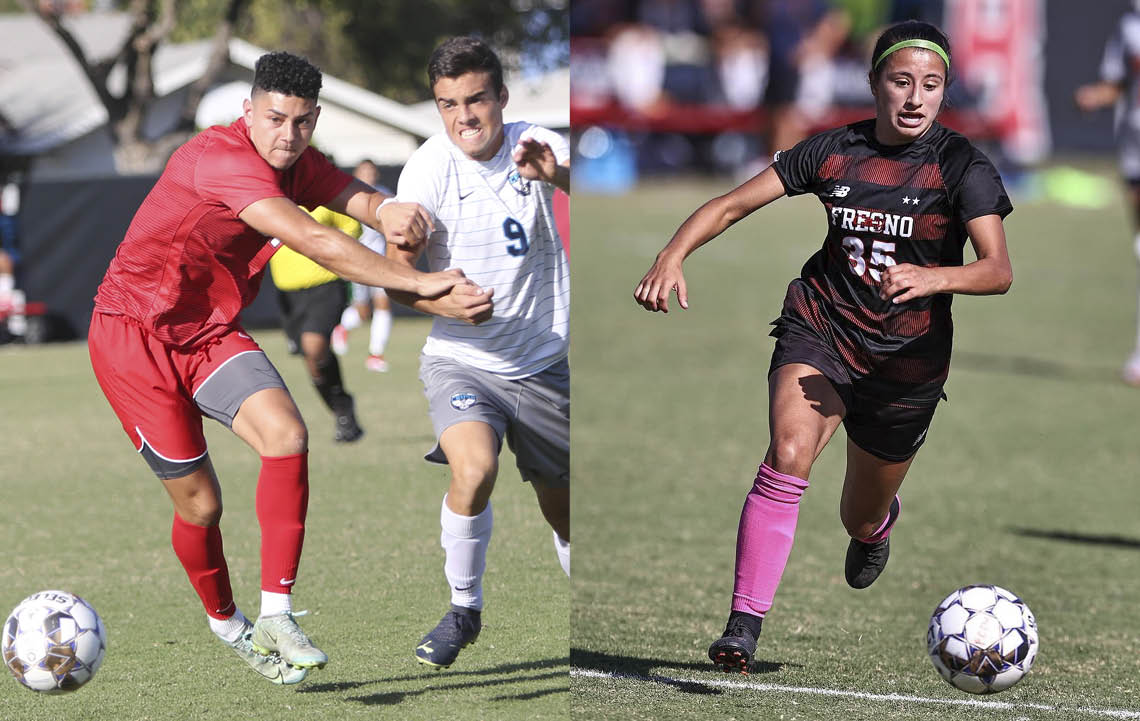 The men’s soccer team continues to dominate the Central Valley Conference with an 11-2-1 overall record thus far. They are ranked first in Northern California, second in the state and 5 in the country. The women’s soccer team has an 8-2-3 record and is ranked 18th in the state. The defending State Championship volleyball team is 15-7 and is ranked 8th in the state. The men’s wrestling team remains undefeated after knocking off Skyline 39-14 and beating Modesto 38-12 in their last two duals. The Rams also had another stellar wrestling performance in the Modesto Tournament with five individuals claiming first place in their respective weight brackets. Check out all the team schedules and results on the FCC athletic website.