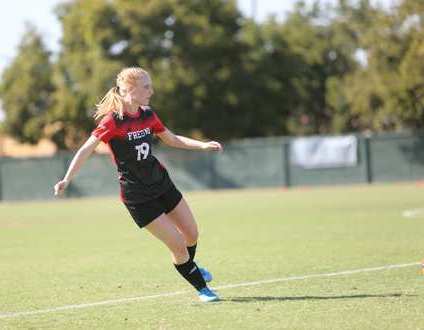 RIVERSIDE - In the first California Community College Sports Information Association (CCCSIA) women’s soccer poll of the 2019 season, it is Fresno City that takes over the top spot by a sizable amount of votes. Cypress followed at second overall, while Lake Tahoe was edged for third overall.

Fresno City has gotten off to a strong start by defeating a pair of Southern opponents in Citrus and East LA, while taking down two Northern teams in Las Positas and American River.  They have not allowed a single goal this season while outscoring their opponents 11-0. Their first two games saw 1-0 scores, but their second two scores saw wide scoring margins (5-0 vs. ELAC & 4-0 vs. ARC).

"We are honored to be ranked #1 in California. Our young ladies worked so hard in the summer to prepare themselves for the competitive season," said head coach Oliver Germond. "However our goal is to keep improving every game so we can win another conference championship and have a chance to compete in the final four,” said Germond.

No. 2 Lake Tahoe, who reached the CCCAA State Championship as the top seed from the North, has gotten off to another strong start by beginning the season on a 4-0-1 run. They have allowed just two goals while scoring 15. One of their victories came against No. 4 Cerritos by the final of 4-1 just last week. They were just one game away from earning their first ever State Championship in program history.

No. 3 Cypress is one of four Orange Empire Conference (OEC) to reach the top-20 as they are accompanied by defending champion No. 5 Santiago Canyon, No. 8 Fullerton and No. 14 Santa Ana. No. 6 Folsom Lake has earned three wins thus far and one tie highlighted by the Tie over No. 3 Lake Tahoe and a commanding 6-1 victory over No. 20 West Hills Lemoore. They will face off against No. 9 San Joaquin Delta for their conference opener in mid-September.

No. 7 San Diego Mesa runs the Pacific Coast Athletic Conference thus far with a flawless 4-0 record. No. 10 Sierra has earned a 4-1 record in a league that has three other ranked opponents – No. 6 Folsom Lake, No. 9 San Joaquin Delta and No. 11 Santa Rosa.