Embracing Our Culture Through Higher Education

The Native Youth Summit is a joint venture composed of teachers at Fresno City College and the greater Native American community in the San Joaquin Valley. The Native Summit will be held Friday April 6th 2018 at the historic Old Administration Building on the campus of Fresno City College; consisting of lecture presentations, cultural workshops, and discussion groups.

The highpoint of the summit will be workshops led by Indigenous Enterprise, a Native American dance group known for their cultural creativity and leadership throughout Native America. There is more; Frank Waln an Indigenous American (Sicangu Lakota) rapper, songwriter and activist from the Rosebud Sioux Reservation in South Dakota will be our keynote speaker and perform his music for our Native American community April 6th 2018 (Location: Fresno City College Main Gymnasium).

The theme for the 2018 Native Youth Summit is: 7th Generation Strong: Native Youth Activism in the Age of Standing Rock

Participation is open to all Native Americans grades 7th and 12th, first year college students. If you have a child in the 5th or 6th grade that would like to participate in the summit please contact Dr. Navarro via email. We will make an exception. Registration is limited to 250 participants. Lunch will be made available for at registration beginning at 11:00 am.

“Let us put our minds together and see what life we can make for our children.” ~Sitting Bull

Frank Waln is an award winning Sicangu Lakota Hip Hop artist, producer, and performer from the Rosebud Reservation in South Dakota. A recipient of the Gates Millennium Scholarship, Waln attended Columbia College Chicago where he received a BA in Audio Arts and Acoustics. Waln’s awards include three Native American Music Awards, a 3Arts Award, the National Center for American Indian Enterprise Development 2014 Native American 40 Under 40, and the 2014 Chicago Mayor’s Award for Civic Engagement. He has been featured on Buzzfeed’s 12 Native Americans Who Are Making a Difference, USA Today, ESPN, and MTV’s Rebel Music Native America. Waln has written for various publications including Decolonization: Indigeneity, Education, and Society and The Guardian. Frank Waln travels the world spreading hope and inspiration through performance and workshops focusing on self-empowerment and pursuing dreams. 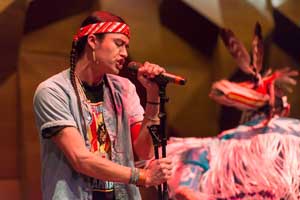 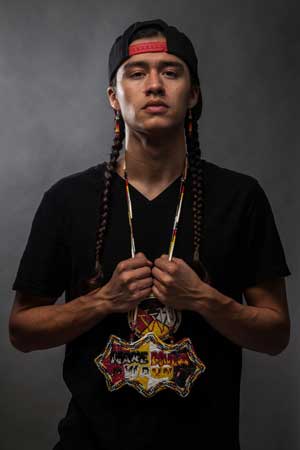 On Saturday April 7th 2018 Fresno City College will host the Still Standing Powwow, which will be held in the Main Gymnasium on campus. This will be the first powwow on campus in over 20 years. The Powwow will begin at noon sharp and end at midnight. The Powwow will feature host drum Indian Hill, the dance group Indigenous Enterprise and dancers from all over California including Montana Senator Jonathan Windy Boy. Come and join us as we celebrate our beautiful heritage and show the world that we are Still Standing!

For vendor forms and information regarding the powwow contact:

The purpose of the Native Youth Summit is to promote Indigenous education, culture, and leadership. Our mission statement: “Embracing our culture through higher education” is meant to inspire Native American students to pursue higher education while working to protect and preserve Indigenous cultures and life-way’s. We want to offer summit participants the opportunity to learn from presentations, to engage in cultural workshops, and to share thoughts in discussion groups.

Please register no later than April 1, 2018.  Calls will be accepted after this date.